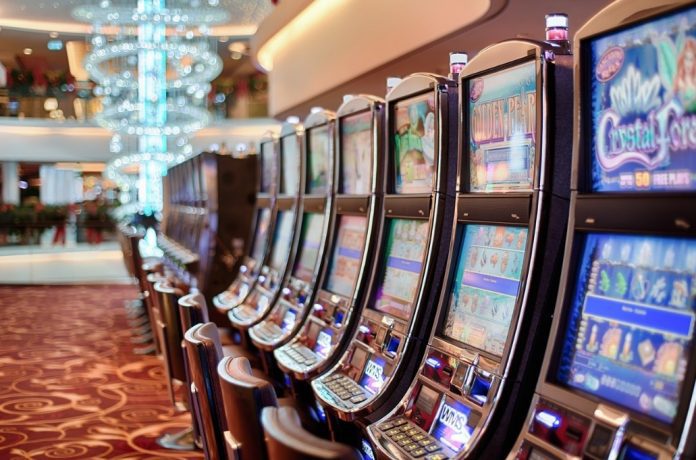 Slot machines are the most popular casino game in history. Visit any Vegas casino and you’ll see players sitting at machines morning, noon, and night. Their online counterparts are equally well received with thousands of variances in themes and styles.

So, where did it all begin?

The Beginning of Slot Machines

Charles Augustus Fey is credited with inventing the first slot machine, although an earlier machine was developed in 1891 by Sittman and Pitt. Their machine was based on poker and didn’t have an automated payout system.

As it was based on poker a familiar game, there was no need for casino terminology in detail as everyone knew how to play.

The Fey model is believed to have been developed between 1887 and 1895 and did have an automated payout system. He called his model the Liberty Bell and had the clever idea of reducing the number of drums and symbols (playing cards in this case), to make it easier for the machine to identify when a winning combination was found.

Fey made the mistake of not patenting the slot machine and as such the design was soon copied by others.

Rise of the One Arm Bandit

In 1907 slot machines were banned in America. The Liberty Bell continued to be manufactured, however, with prizes consisting of sweets. To make the machines more appealing, the card symbols were changed to fruit symbols that we now know and love. The next evolution of slots was the development of the Operator Bell by Herbert Mills. The BAR symbol we all know was based on the Bell-Fruit logo.

The mechanical machines required an arm to be pulled down to activate it. The ‘one-armed bandit’ nickname caught on and has been with us ever since.

In 1964 the first fully electromechanical slot machine hit the market. The early machines still featured the mechanical arm as it was felt pushing buttons would be too much of a change for the public to endure. As well as an electromechanical design the machine had a bottomless hopper and could dispense 500 coins in one win.

In 1976 Las Vegas company Future Coin developed the world’s first video slot. Manufactured in Kearny Mesa, California, it featured a modified Sony TV to present video to the player. It was quickly licensed by the Nevada State Gaming Commission and became extremely popular by 1978.

In 1996 the bonus round video was introduced. Here, players would be shown a completely different screen providing more opportunities to play and increase the jackpot. Interestingly, slots were accounting for 70% of casino revenue at this time and most casinos devoted 70% of floor space to slots.

As well as bonus round video slots, online slots were developed in the late 1990s and since then there has been no turning back. Online casinos now feature slots providing thousands of different styles and themes to players.

As with their land based counterparts slots have proven very popular and players have adopted the technology on mobile devices.

There can be no doubt that the slot journey is fascinating, and what the future holds for slots promises to be even better.