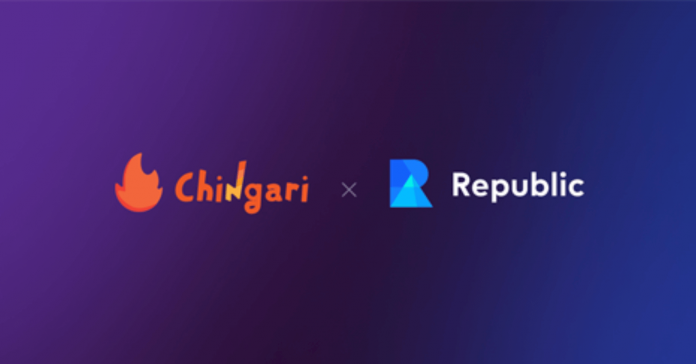 Announced Tuesday, Chingari, a creator-friendly platform to upload short videos, will kickoff its token sale in November, 2021, helped by Republic, a top investment firm that has raised over $200 million for hundreds of crypto and startup platforms. According to the statement, the $GARI token will be used to incentivize creators on the platform and connect video creators with their fans.

This marks the start of a new era in Chingari’s roadmap to create an enhanced and popular social app competing with the likes of Facebook, Twitter, Reddit, and obviously Tiktok. The token sale follows the recent milestone mark of over 85 million app downloads, which has placed Chingari as the third largest social media platform in India, according to SimilarWeb Leaderboard.

Sumit Ghosh, the CEO, and co-founder of Chingari is expecting the token launch to spur the growth of the platform, naming it a “critical step” in their creator-first strategic roadmap. He believes the token will further entice creators to the platform as the world moves towards a creator economy.

“While the creator economy is burgeoning and creators are becoming a pivotal force of this revolution, we believe that creators should be in charge of how the platform is taking shape,” Sumit said on the recent token launch. “With the introduction of $GARI, we are vesting the decision-making powers back in the hands of the users and enabling content monetization to become more mainstream in India.”

Since India’s ban on Tiktok, Chingari has grown in popularity as millions of creators and users joined the app to explore their creativity. Additionally, the platform offers users a more open and free place to become creative, have more control over their channel, and earn a passive income from creating videos.

With the $GARI token users and creators will be enabled to connect with their fans, create NFTs for their followers, sell custom merchandise, and interact in various ways with their fans. As such, the platform aims to attract some of the top and most talented influencers to the platform hence improving the quality of content for its growing user base.

The token sale is set to attract a multitude of investors given the recent user acquisition and daily user growth the social app has witnessed. Republic, which will facilitate the token sale expects a huge response from investment firms of all sizes. The $GARI token was launched two weeks ago at an official party that welcomed top investors and celebrities including Bollywood superstar Salman Khan, who is the brand ambassador of Chingari.

India’s recent Supreme court ruling overturning the ban on crypto and exponential growth in the crypto field in India will allow most investors to participate in the token sale. Additionally, India is adopting a clear regulatory framework that will attract qualified Republic investors, a statement from Republic reads.

All in all, the move from a Web2 application to a decentralized Web3 application will build Chingari as the future of social media – rewarding and incentivizing all participants in the ecosystem for their efforts – whether a user or creator. Graham Friedman, Director of Token Offerings at Republic believes the $GARI token will “set a new standard for traditional companies” and “build an economy that is both active and meaningful to their users and creators”.