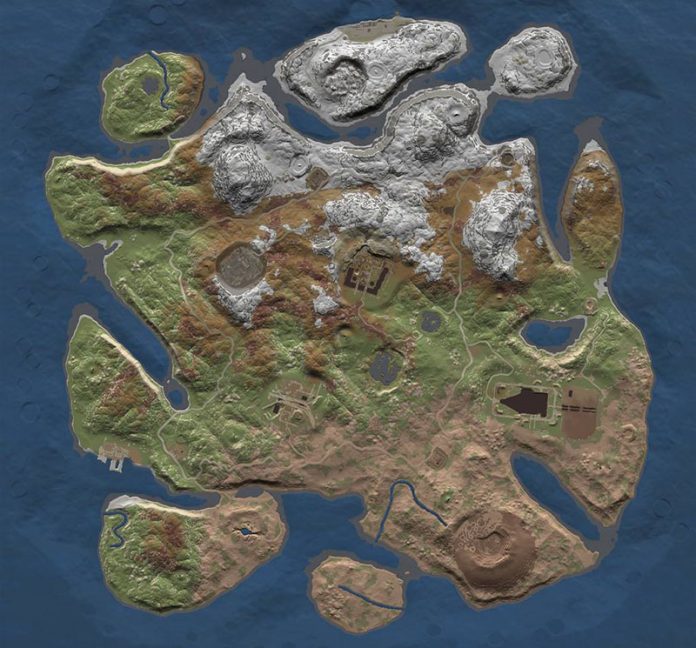 The game of Rust has a vast landscape to explore, and knowing where to go and what to expect can help immensely. Some maps have one kind of terrain. Other maps have different terrains, and players are often frustrated to find weaponless buildings.

Proper knowledge about rust maps, their types, and their characteristics is an integral part of Rust. It allows you to move forward with the right gear and protects you from typical mistakes that lead to deaths or wasted time.

Check out this guide below to learn more about map kinds and characteristics!

The Rust map is one of the most essential parts of the game since it’ll significantly impact your survival situation. In addition, you’ll have varied options to travel, plunder, and construct based on how the terrain is set out. Thus, the Rust map you pick is quite essential. You may even choose whether to utilize the default randomized procedural map or something completely different when you start a session.

Without this map, players would have to use memory or walk around to find various towns, landmarks, and points of interest. It is also used for other game-related purposes, such as looking up your location to travel there.

The grid overlay is among the most helpful features of the Rust maps. Every column has a letter, and every row has a number, which comes in useful if you’d like to let the other player know you’re in E6.

By clicking on ‘Grid’ on the top left side of the map, you may enable or disable the grid overlay. If you’re playing in a group, your partners will display as green dots on the map. A yellow dot represents your current location.

Lastly, on the map, keep an eye out for stores and vending machines. You can see what they’re offering and what they demand in exchange by hovering over the store signage. Although NPCs typically own the stores surrounding Landmarks, players may also build their stores and convenience stores. The player stores are typically referred to as “A Shop” and are located in more remote locations.

Procedural rust maps are critical in Rust because they help players explore and find new routes and provide some protection against other players. Procedural maps are also used to generate loot, resources, and crafting recipes needed by the player during gameplay.

The barren map in Rust is a desert-like area that is entirely devoid of green and water. It is the perfect place for players who want to experiment with managing resources, but it can be hard to survive by just scavenging.

The Barren Map has some exciting features, including a lack of wood, stone, metal, and other valuable items found in normal maps, making things more challenging for you and your team.

Custom maps in Rust are the most basic way to allow people to create their maps even if they don’t know anything about programming. For example, it will enable you to pick a location, a type of building (both residential and industrial), some things to plant (such as trees or buildings), and a few other things. You can then add whatever you want to it.

Media and images used to create the map are placed correctly according to the placement order of the blocks in the level (so, don’t place water on top of a dirt path, for example).

The map layouts are different in each playthrough & offer an unpredictable and exciting experience. Every map has other areas that the player can explore. You can continue exploring them years later; it’s up to you how long you want to sit on a specific server or what aspects of the game you want to explore again.

One of the main objectives for both islands is to gather materials and find other survivors. The Rust game relies on premade maps, and players are given a certain amount of time to see all the materials they need or get off the map before they die.

Hapis Island is a place where it’s hard to survive, but Savas Island is an island with plenty of resources and life. However, some people just like wandering, so they don’t have to stay on one island for too long.

Although the Rust community is very competitive, the maps are not intended to be competitive, and most matches do not consist of players fighting over territory or resources. Conclusively, these maps provide a more exciting and immersive experience for players.