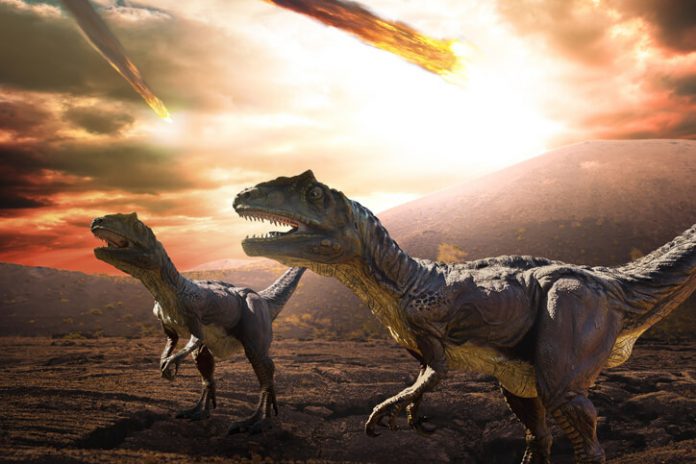 We have all wondered what life was like over 60 million years ago. That is why we turn to history books, movies, or playing darmowe gry hazardowe jackpot to get the feeling of how previous times were like before. And if you know your history well, then you know that dinosaurs might have become extinct when a 6-miles space rock hit the ground. However, this is something that scientists are still looking closely into, with the recent findings showing that dinosaurs might have been doomed already 10 million years ago before the crash.

That research found that six major non-avian dinosaur groups were slowly going extinct before the meteorite. The impact of the crash was a cloud of thick dust that blocked the sun, raging fires, and super large tsunamis.

According to Fabien Condamine, a research scientist at the University of Montpellier based in France, the meteorite was not the finish point for the dinosaurs. Condamine and several scientists suggest that global cooling, which occurred way before then, may have led to a decline in the number of dinosaurs. This, in turn, made it more difficult for the remaining species to recover after the catastrophic event. Many palaeontologists believe that the dinosaurs might have continued living if the space rock did not hit the planet. However, Condamine believes that their new study brings out new findings that suggest otherwise.

Dinosaurs Were Already in Bad Shape before the Asteroid

Scientists examined more than 1,600 fossils from around 247 dinosaur species to prove this new study. All of these individuals were from the late cretaceous period, which was about 160 million to 66 million years ago. The focus was based on six large families, including duck-billed dinosaurs and two-legged groups such as T-Rex.

Once divided into groups, the researchers observed how the diversity of those species changed over time. The results showed that the number of species began declining slowly 76 million years ago. According to Condamine, the dinosaur diversity was not as high during the late Cretaceous period as we had all thought previously.

This new study is not the first one to suggest that dinosaurs might have gone extinct before the space rock. A 2016 research discovered that when the species of dinosaurs went extinct, no new ones replaced them. Unfortunately, most people questioned the findings since it was based on a partial fossil record.

A Change in Climate

As per the new studies, the planet began to cool in the late Cretaceous period, with the temperatures dropping to about 13 degrees Fahrenheit (70C). So, if dinosaurs depended on their surrounding temperature to control their body heat, then a climate change might have resulted in them declining in numbers. According to the findings, a warm climate favoured the existence of dinosaurs while cooler periods increased their extinction.

Besides all these, one question remains, what would have happened if the space-rock had not hit Earth? Would the number of dinosaurs still decline, or would they have rebounded? Well, it is hard to say. Nonetheless, many palaeontologists believe that humans and primates could not have appeared on Earth if the dinosaur species had survived. Therefore, we can say that the climate deterioration and big changes in the vegetation led to the end of the Cretaceous period and that the asteroid caused the knockout blow.