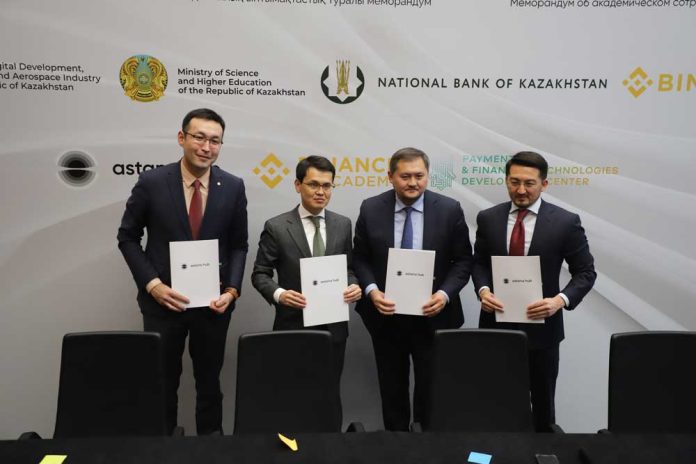 Kazakhstan’s government and Binance launched a special program, for training 40,000 blockchain engineers, in 22 universities across the central Asian country

Kazakhstan has launched the world’s largest Blockchain Educational Initiative. The project was developed jointly with Binance Academy. More than 40,000 specialists in blockchain technologies will be trained in Kazakhstan by 2026. Kazakhstan will be one of the first countries in the world to embed the basic blockchain curriculum in the Universities’ programs across the whole country. Kazakh Professionals with knowledge of blockchain, digital assets, and compliance will become a resource for the global blockchain industry.

A memorandum on blockchain academic cooperation was signed in Astana last week (12.12.2022) by the Kazakh Minister of Science and Higher Education, Sayasat Nurbek, the Minister of Digital Development, Bagdat Musin, and the Chairman of the Board of JSC Center of the National Bank of Kazakhstan, Binur Zhalenov. Binance was represented by Zhaslan Madiev. The whole initiative stems from the meeting of President Kassym-Jomart Tokayev, Kazakhstan’s head of state, and Changpeng Zhao, co-founder, and CEO of Binance, in May this year, where they discussed cooperation in blockchain and crypto education.

Later in June, the Center for the Development of Payment and Financial Technologies of the National Bank of Kazakhstan and Astana Hub established the Research Lab ‘Blockchain Center’ to develop and implement this unique education program across the world’s 9th largest country. Minister Sayasat Nurbek noted the importance of the provision of educational materials on blockchain engineering: “Being interested in training competitive specialists for our economy, we, together with representatives of the IT sector, are creating a solid foundation of educational projects in this area. Kazakhstan’s higher education system will become a supplier of professionals for the global blockchain industry”.

Indeed, Kazakhstan will become the first country to introduce an educational program in universities on a nationwide scale. In the pilot mode, 22 universities across Central Asia’s largest country, will train more than 40,000 students. To date, this is the largest global educational initiative in the blockchain industry, which has no analogs.

The meeting in Astana was also attended by Stephen McCallister, Head of the Binance Academy Partner Relations Team; Aidana Kaskyrbek, Director of the Blockchain Center; and representatives of universities intended to run the blockchain educational studies. Binance academy will assist in training the teachers starting on February 2023. Students’ education will begin in September 2023.