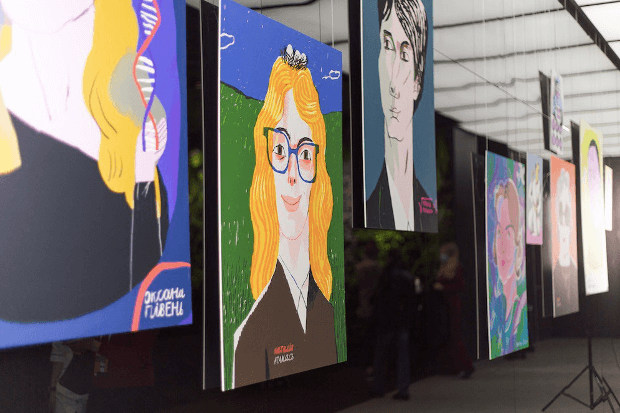 In February, a nationwide educational art initiative SHE is SCIENCE was launched in Ukraine. The project aims at promoting science as a not “only-men” sphere of activity by showing the example of 12 prominent Ukrainian women scientists. The project wants to promote the idea that women have the same rights to science as men and eventually achieve in STEM areas success at the world level. Charitable educational project STEM is FEM, the coordinator of the initiative has chosen an unusual pair for science to implement their idea – art. The head of Gamingtec, co-founder of the STEM is FEM project Sapar Karyagdyyev told us about how creativity helps popularize science and how media and entertainment can help with this process.

The gender imbalance problem is still acute. Even thoнugh we are living now in the XXI century when progressive humanity strives for gender equality in every possible sphere, according to the UNESCO Institute for Statistics, back in 2017, only 28% of world scientists were women. In addition, women’s salaries in science were, on average, 25% lower than men’s. The heroines of SHE is SCIENCE are women with significant achievements in mathematics, biology, physics, medicine, genetics, and ornithology.

“Gender inequality, unfortunately, is still widespread in almost all science branches, both technical and natural. That is why we chose heroines from different fields in order to demonstrate that in each field, there are women who have managed to turn the scientific world upside down,’ says the initiator of the project, Sapar Karyagdyyev.

Despite the wide educational work on gender equality done by international and national organizations, changes in this regard are going rather slowly. The STEM is FEM project decided to conduct an experiment and combine science with art. First of all, they decided to popularize women scientists through painting and literature. Within the framework of the project, there were two main directions: an art exhibition dedicated to 12 women scientists and a competition for the best essay among girls aged 14-21 about one of the heroines of the project. On March 5, a pre-premiere portrait exhibition took place in Kyiv. The portraits were created by modern Ukrainian illustrators headed by Sergiy Maidukov.

‘We come up with unusual formats for implementing our ideas, and the media, in turn, takes it over and presents news about our project in a creative way. The Internet media made tests on knowing Ukrainian women scientists, created interesting podcasts revealing the topic of SHE is SCIENCE, and so on. This proves that Media Entertainment can perform not only its direct functions of entertainment but also serve as an assistant in achieving serious social goals,’ says Sapar Karyagdyyev.

At the moment, the qualifying stage of the SHE is SCIENCE essay competition is underway. An expert jury consisting of scientists, professional journalists, and editors reviews essays sent from all over Ukraine and even from abroad. In total, the organizers of the project have received 563 essays. In these essays, girls set out not only biographical information about scientists, but also reflect on how their scientific contribution influenced the formation of science and life in general. The project coordinators admit that choosing only 12 (one for each scientist) written work is quite difficult. Each text is interesting and deserves attention.

‘Many girls wrote that while searching for information about the heroines, they were imbued with their life and scientific career so much that they also decided to do science. For example, one girl wrote that the scientific activity of Natalia Atamas inspired her to take ornithology lessons,’ notes the initiator of the project.

The Grand Prix of the competition, $4000 for studying in any educational institution, will be awarded to the best one of the 12 finalists. This amount will be supplemented by the funds raised during the charity auction, which is planned to be held in May.

‘The main lots at the auction will be NTF tokens for 12 paintings. We decided to stick to our tradition and be innovative until the very end of the project. Non-fungible tokens are a fresh, relevant, and promising trend. And relevance and innovation are the key attributes of science,’ says Sapar Karyagdyyev.

STEM is FEM is a charitable educational project aimed to popularize tech specialties among Ukrainian schoolgirls. As part of the project, the organizers conduct numerous free training events on technical and general educational topics.