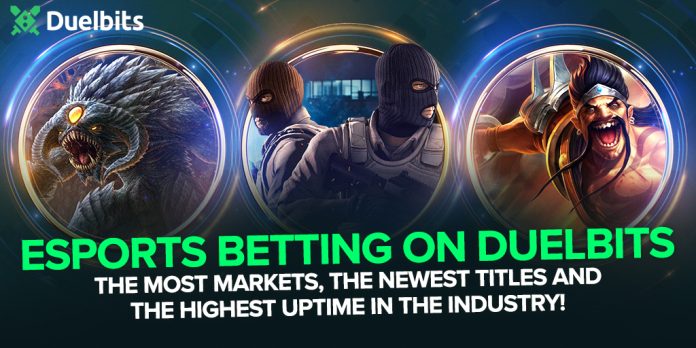 Online gaming sites first started appearing on the internet in the mid-1990s and have since boomed into a multi-billion dollar industry. Virtual casinos led to online sports books and in February 2020, the Liquid Gaming NV Group introduced its crypto betting platform Duelbits. Boasting unrivalled uptime and over 3,500 titles to choose from their 60 game providers, Duelbits is set to be a game-changer in the online sports betting industry.

Duelbits bridges the gap between traditional bookies and land-based casinos with revolutionary blockchain technology. They focus mainly on crypto gaming, enabling punters to make deposits with digital coins, such as Bitcoin, Ethereum and Litecoin as well as the more standard payment methods, such as Paypal and credit cards. It is the perfect combination of gambling and gaming, offering the widest selection of esports games and betting markets.

Duelbits also has the industry’s highest uptime and most betting markets. This means more betting opportunities for bettors especially during live betting unlike the competition. Online betting fun couldn’t get better than this!

Duelbits offers the best markets for those wishing to bet on Counter-Strike: Global Offensive. This game has two teams of players square off against each other, where one team is the terrorists and the other the counter terrorists. The most popular version of this game involves rescuing the hostages or stopping the terrorist team from planting a bomb.

League Of legends is a remake of the custom map Defence of the Ancients from Warcraft 3. This game pits two teams of 5 players against each other in player versus player combat where each team has to destroy the Nexus of the opposing team. Punters can watch live matches with the best uptime for these amazing matches.

Another remake of the Defence of the Ancients map from WarCraft 3 has players face each other in this arena battle game. Dota 2 has a huge international esports scene  with leagues from across the world competing in tournaments with prizes up to $40million. Get in on the action with Duelbits and the vast selection of markets available.

Call of Duty is one of the most played esports games to date and one of the most popular on Duelbits due to the amazing uptime. Matches comprises two teams battling it out over mostly five matches. Popular game modes include “Search and Destroy” and “Domination”

Widely known as Siege, this game by Ubisoft, is a FPS mostly centred around tactics, where players can make use of operators from around the world. Each of these operators comes with a different skill set, weapons and gadgets.

This free to play game from Riot takes its inspiration from other tactical shooters, such as Counter Strike with team-based gameplay. This game splits players into two teams, with teams either attacking or defending a point on the map with you being able to back your favourite team on Duelbits. Players can choose from various agents, each of which has unique abilities.

This multiplayer team based first-person shooter from Blizzard, with two teams of six facing each other. Overwatch features a large roster of games that players can pick from known as Hero’s, each of which comes with their own abilities.

This quick match multiplayer online battle arena game, published by TiMi Group, is one of the most popular games in the world, especially in eastern markets. Each player controls one character on a predetermined battlefield with unique abilities that improve while the game progress.

StarCraft still has a very active pro-gamer community, especially in South Korea. This real-time strategy game was one of the first to inspire professional gameplay and regular streamed matches.

This game by Blizzard is free to play, based on collecting digital cards. This is a turn based game using decks of 30 cards based on WarCraft lore.Players summon minions with the purpose of attacking and defeating their opponents’ hero.

Fortnite, published by Epic games, is a battle royal where 100 players face off on a map to be the last man standing. Players must scavenge for weapons, resources and items and try to survive a closing storm. Duelbits offers you the most markets and best uptime so you never miss out on backing your favourite players.

This game published by Blizzard is a high fantasy real-time strategy game that has stood the test of time. The game has players collect resources, build their bases which they need to defend from other players and train units.

Rocket League Is best known as vehicular soccer, with players controlling a rocket powered car which is used to scare goals in a net. Matches are normally 5 minutes long and can have from 2 to 8 players with markets to bet on always available at Duelbits.

Duelbits is reliable, reputable, and licensed by the Curacao gambling authority. It is based on provably fair algorithms, which allow players to verify the randomness and fairness of gameplay. They are continually introducing new titles, and the ever-expanding sports betting section provides endless hours of entertainment. If you are an avid gamer, this is undoubtedly your first point of call when looking into crypto gambling and online sports betting.