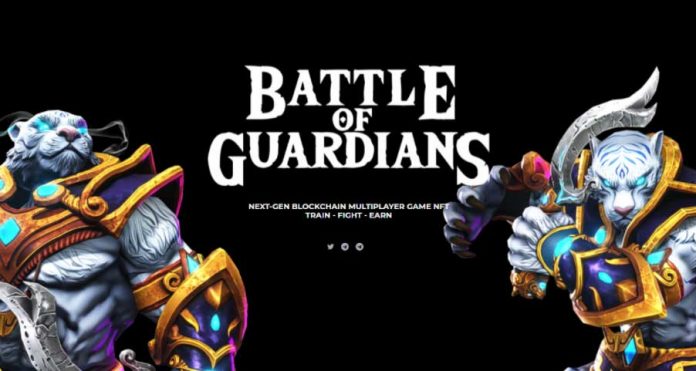 Battle of Guardians is a multiplayer blockchain-based PvE and PvP fighting game played in real-time. The Solana network supports this new title, which is brought to life with Unreal Engine. After joining, players will get to uncover an exciting new fantasy world via their NFT-asset characters. To master it, you can hone your skills either by squaring off against various NPCs or by challenging other online players. If successful, you are in for a treat.

For one, Battle of Guardians offers a plethora of worthwhile in-game rewards. However, by participating, you can earn special tokens as well. The exciting thing is that those currencies have value in the real world, too. As a result, by training and fighting your way at the top of the leader boards, you will even turn some profit.

The Setting of Battle of Guardians

Countless eons in the past, extraordinary creatures called ‘guardians’ lived alongside mankind on Earth. These sentient beings were fiercer, stronger, and had powers men could only dream of. So, due to their immense strength and god-like abilities, humans worshipped the guardians as deities.

However, as time passed, humans began to develop their society, heralding the advent of technology. Given how quickly their engineering advanced, they slowly grew apart from the guardians. Soon, this progress overshadowed humanity’s need for religious figures. As a result, the existence of guardians became a fable.

Thousands of peaceful years went by, yet humanity’s curiosity delved deeper still. Then, after reaching a certain technological level, scientists managed to open a portal to Hell. But, this experiment soon backfired, as demons started using the connection to cross over to Earth. Quickly, these visitors became an invading force, easily overpowering Earth’s defenses. This conflict left human civilization in ruins.

After this devastating defeat, humans succumbed under Hell’s reign. Their lives consisted of torment and suffering, and no one knows for how long exactly. But, as soon as the last remnants of hope began to fade away, the power of light suddenly returned. It was the guardians who descended to undo humanity’s biggest mistakes. That is why today, we know them as the protectors of Earth.

There are three main characters in this NFT game, each representing a race. So, you may choose between guardians, humans, and demons. It is important to note that they differ in attributes, offering various tactical advantages. Think of it as a ‘rock-paper-scissors’ scenario — humans rely on intelligence, guardians on their strength, while demons have vast health pools.

Players should also consider their basic stats. For example, the character’s health points indicate their vitality, while the damage value shows their offensive potential. Finally, intelligence represents the extra points of damage accruing to the skill in use. Plus, you can string some actions in a combo, resulting in a visually captivating performance. Recently CrytpoMinati Capital also tweeted about it.

However, there are new nft games in the market showing their creativity through the virtual world.

The Elite Fighter tier is the ‘beginner’ category earned at the start. So, players on this level are still learning the ropes and finding their way. As a result, this tier holds some lower-rarity rewards.

The Legendary Warrior tier is more advanced and requires intricate game knowledge. Also, it offers more attractive tokens and items. Then, the God of War tier is at the top. It is the summit of in-game skill, where only grit and creativity can take you. Hence, the most legendary rewards await you upon crossing this threshold.

Key Features of Battle of Guardians

You can start your journey from any available mode — the Story mode, the Arena mode, or the Tournament mode. The Story mode is PvE-centered, allowing one to dominate various AI enemies while growing as a combatant. For this, players will unlock higher difficulty levels, ever-expanding their move set. As a result, it is a learning tool, preparing you to face off against real opposition.

The Arena mode is the player-vs-player mode. In other words, here is where you will meet the other online players. If selected, this mode will soon pair you with a match, initiating the clash. Earn points by playing well, and soon you will climb the ladder of success.

The Tournament is the only game mode that involves extra payments. However, these are not your typical ‘entry fees’. Instead, in a Battle of Guardians tournament, each participant deposits a sum directly into the prize pool. Next, all of the 8, 16, or 32 players will join a random group and organize at the lobby. From there, classic knock-out rules take place. If you manage to advance to the later stages, you may end up taking the cake.

The Vision Behind Battle of Guardians

This game’s creative team aims to develop a dedicated non-fungible token (NFT) marketplace. The plan is for players to trade with various NFT assets earned in-game and create a thriving economy. Additionally, there are other uses for these rewards as well. For example, you can raise your NFT’s value even when not playing via the option to lend them to another player for a fee. In that way, the Battle of Guardians’ marketplace is sure to stay crowded. You can always join the telegram community to get the latest updates on the same and many more NFT gaming platforms. One of them is Crypto Gaming Bulls.

Players can also combine NFT characters through the NFT Synthesis system. So, if a game level needs a stronger character than what you have on hand, you can fuse them. By doing so, you will lose on quantity but gain more in the long run.

This game’s economy uses the $BGS as the primary token. However, there are other in-game currencies for trading and similar purposes. Also, this ecosystem allows you to stake and buy NFT characters with these values. So, a good winning streak can quickly fill up your crypto wallet.

Another attractive token is the $FP. These are used for more advanced tactics like fusing characters. Plus, tournaments will ask for them as entry tickets. In that way, both of these tokens hold much value. You will need $FPs to enter bouts, and the gained $BGS helps you establish your place on the ladder. Either way, this metaverse hides many exciting offers.