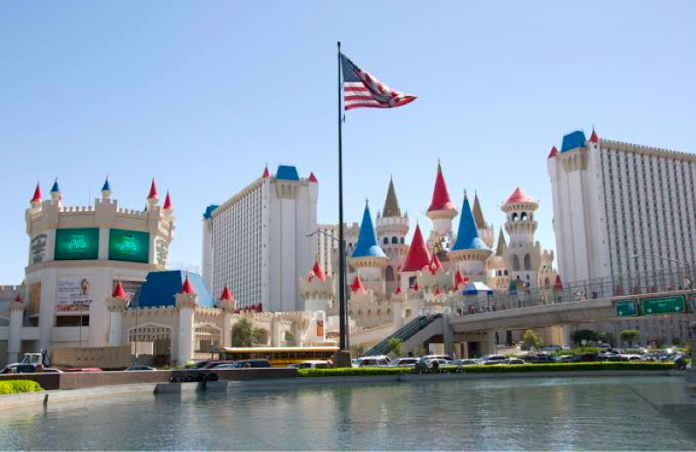 It is crazy, but more than eighty casinos, several thousand gaming pavilions, and hundreds of fashionable hotels are concentrated in Las Vegas. It is the only place in the world where you can see the Eiffel Tower, the Brooklyn Bridge, and the canals of Venice at once in just a few hours.

Las Vegas is the last stop on the way to paradise. They do not keep track of time. There are no wall clocks; there are only endless eateries and rivers of drinks.

Las Vegas knows how to fulfill any dreams, so if yours is to be in a fairy tale, the city will quickly bring it to life. We offer you a list of the best hotels where you can stay to feel like a Disney princess or king.

Guests of Las Vegas have the opportunity not only to visit a fairy tale but also to live in a real castle – at the Excalibur Resort Hotel. With the onset of darkness, its atmosphere becomes even more magical. Mostly thanks to the blue and red lights on the turrets of the building.

The building of the hotel is styled as a fairytale castle. It has the onset of darkness; its turrets are decorated with blue and red lights. The hotel has a great casino with an area of ​​9,300 square meters, as well as an exciting shopping gallery and a unique hall for theatrical and musical performances.

In the vast surrounding area of ​​the hotel, there are several swimming pools of non-standard shapes. There are also spacious terraces with tents and soft sun loungers. The hotel fully lives up to its name, as here clients are offered medieval entertainment for every taste. Enjoy knights tournaments in the hall for 925 seats or dinners in medieval traditions.

Moreover, on the territory of the hotel, there is a chapel where wedding celebrations in the medieval are held. The ceremony is possible in several languages: English, Spanish, French and Portuguese, Italian, German, Hebrew, and Arabic.

This hotel cannot boast about an impressive exterior or the highest level of service. But it has a very cozy atmosphere. It has unusual entertainments associated with the main character of The Little Mermaid cartoon. There is a massive aquarium in which “mermaids” swim, and a pool. Also, the concert hall in Silverton has a fantastic crew; they perform the musical about this princess mermaid.

Perhaps this is the most famous and legendary hotel in Las Vegas. It was at Caesars Palace that episodes from cult Hollywood films were shot, including Rain Man, Ocean’s 11 Friends, and Bachelor Party. Therefore, if one of the actors comes to Vegas, you can be sure that they will stop here.

Luxor is perhaps one of the most recognizable buildings in Las Vegas. The fact is that architects made it look like the pyramid in Giza with the Sphinx. This building has a realistic Egyptian style. Inside, there are bars and restaurants, several nightclubs, concert halls, as well as entire floors of gambling. Where else to go for treasures, if not a pyramid?

Fans of a beautiful life will remember the decoration of the new The Cosmopolitan hotel. In the “West” lobby, you can experience the “kinetic space.” Eight giant columns in the center of the hall are entirely covered with mirrors and LCD screens.

From this lobby, you can get to the bar. The conceptual idea of ​​this bar is light silver chains hanging from the ceiling in the manner of translucent curtains. It will immediately remind you of the palaces from movies based on Arabic fairy tales.

Mandalay Bay Beach Hotel is unique in its way. In addition to a stylish casino and a well-maintained 4.5-hectare beach, it offers vacationers a visit to the aquarium. There you can see rare inhabitants of the underwater world and dangerous sharks.

Gourmets will also have a pleasant surprise; they will be able to visit the famous Mix restaurant. Its hall is decorated with original designer accessories from Murano glass, and the menu includes a lot of exotic dishes. Special recipes for lobsters and buffalo fillet, signature crab salad with spicy dressing, seafood curry – a worthy dish for every taste.

Travelers who choose the Paris Las Vegas hotel will have the opportunity to appreciate the culture and traditions of the French capital fully. At the entrance to this originally themed hotel, an impressive replica of the Eiffel Tower is set, surrounded by equally impressive sculptural compositions and fountains.

The hotel houses the famous Napoleon’s piano bar, which has become a regular venue for various music contests and competitions. The interior of the hotel is entirely consistent with its thematic focus. The rooms are equipped with chic antique furniture, and the walls feature paintings depicting Parisian sights.

Guests of The Venetian Resort can make an unforgettable trip to Venice. This hotel is dedicated to the romantic Italian city. In the courtyard of the hotel, there are swimming pools and imitation of Venetian canals, through which you can ride on real gondolas.

In addition to the upscale casino “Italian Hotel,” Las Vegas includes 19 restaurants of various specializations and mesmerizing shows. There is also a chic wine bar where you can taste the best Italian wines.

The Planet Hollywood Resort & Casino has a colorful interior design, and it offers travelers more than 2,400 elegant rooms. The rooms are decorated in different colors; each of them has high beds and upholstered furniture in vivid colors.

Lucian Marinescu, the partner of OnlineCasinoGems, calls the Planet his favorite hotel and the best place to play gambling. “It’s something about the spectacular artistic illumination, the halls of restaurants, casinos and recreation areas look simply unique…and lamps and chandeliers of original shapes emphasize the originality of illumination. Like a dream.”

Las Vegas includes some of the largest hotels in the world, which are more like mini-cities. You can find pretty anything inside one building. The city provides a wide choice of luxurious places, and it is tricky to pick only one. However, leave your worries behind – all of them are indeed magical.