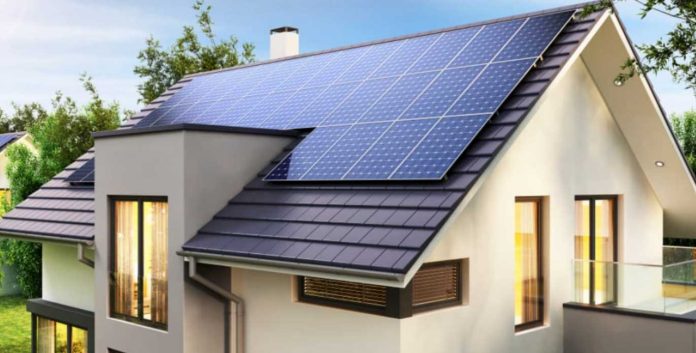 Are you interested in your solar system and keep hearing rumours? We dispel 13 common myths about solar energy!

Myth 1: Is solar energy even worth it?

Solar energy is worth it! Twenty years ago, solar power was still expensive. But those times are long gone. Solar energy is cheaper than ever, thanks to mass production and technical progress. Urgently needed for the energy transition!

It is best to use solar power from your roof yourself. The excess power is automatically fed into the grid and receives a statutory feed-in tariff. Homeowners can generate a return of more than five per cent over 20 years. That is significantly more than the meagre interest on the account!

Modern solar generators also supply electricity when the sky is cloudy. Despite the clouds in the sky, solar systems continue to produce electricity with diffuse sunlight, i.e. without direct solar radiation.

Myth 3: How much energy does a solar system need to produce?

Myth 4: How much does the performance of a solar system drop?

After 20 years, a solar system still has an output of at least 85% – guaranteed! The rumour that the performance of a solar system supposedly decreases after just a few years persists – but it’s completely wrong!

Solar energy has long been a mature technology. Many manufacturers guarantee a high minimum performance after 20 years. And: Even after 30 years and more, today’s ground mounted solar panels still produces good yields. This is how you save money and protect the climate!

Myth 5: Does the roof have to face south for solar energy to be worthwhile?

An east-west orientation is also optimal! A south-facing roof provides the highest yield of solar power, especially at midday when the sun shines the most. However, suppose a household wants to use as much electricity as possible. In that case, an east-west orientation is also ideal: more electricity is generated in the morning and evening and can be consumed simultaneously. In addition, the east and west roofs can be equipped with solar modules instead of just covering one side of the roof to the south.

Myth 6: Can you extinguish solar systems if there is a fire?

However, the risk of fire is extremely low anyway. In the last 20 years, there have been a total of 350 fires involving a solar system on the roof – and in only 120 cases, the system itself was the cause of the fire. In contrast, there are 1.5 million solar systems in Germany. That is a share of only 0.006 per cent! The risk decreases even more with the high quality of the systems and the assembly.

Conclusion: Solar systems do not represent an increased risk of fire. And if there is a fire, the fire brigade will put it out anyway.

Myth 7: Can solar panels be recycled?

Solar modules can easily be recycled. Solar modules consist mainly of glass, aluminium and polymers (plastics). Therefore, 95 per cent of the material can be easily recycled for new solar modules or other products. Only 1 per cent of a solar module consists of other components such as silicon, silver, copper, zinc, cadmium and lead. During recycling, pollutants are removed in a targeted manner and disposed of in an environmentally friendly manner – just like other electronic devices such as mobile phones or laptops.

The same applies to lithium RV batteries: Disused batteries are broken down into components during recycling. More than 95% of the valuable materials contained, such as nickel, copper and cobalt, are recovered.

Solar systems can even be very beautiful! Solar modules are only visually disturbing if only a few are attached or placed irregularly. The matt black or blue surface is visually appealing if the modules are installed evenly on the roof.

Many consider that a rooftop solar system looks futuristic-modern and upgrades the home.

Myth 9: Is solar energy only worthwhile in the desert – or also in Germany?

Solar energy is also worthwhile in Germany! Unfortunately, the prejudice that the sun does not shine long enough in Germany cannot be dispelled. But the weather data tells the truth: Germany has 1600 hours of sunshine a year! A solar system thus supplies 1,000-kilowatt hours per square meter. And the clean solar power from your roof can now also be used at night: thanks to a modern solar power storage unit.

Myth 10: How expensive are solar systems?

Solar systems are economically attractive. Solar power from the roof for self-consumption is cheaper than power from the grid. And if you generate electricity yourself but don’t need it, you feed it into the grid and receive a legally guaranteed remuneration for it. Because of the long service life, a solar system is worth it!

A off grid solar system, including storage, costs between €15,000 and €19,000 for an average family home. In addition, there are annual costs for maintenance, service, any interest on the loan, the replacement of defective components and the replacement of the power storage unit if its performance drops.

Solar systems are a win for the environment! Solar energy reduces coal, oil and gas use and lowers CO2 emissions. Every solar system is, therefore, a contribution to protecting the environment and the climate. The production of solar cells also requires energy, but only a fraction of the energy and pollutants it saves!

Disposal and recycling are already well solved. A solar system consists largely of aluminium and glass, which can be easily recycled. Only 1% of the material volume consists of zinc, lead or cadmium substances. These substances can be extracted, recycled, or dumped like other electrical devices. As the operator of a solar system, you don’t have to worry about the environment!

Myth 12: Are small solar systems worth it?

Even small solar systems can be financially worthwhile. The larger a system is, the fewer one-off fixed costs (such as travel costs or the erection of scaffolding) are. Therefore, small plants per kilowatt are less economical. But if you have high power consumption, for an electric car, they can still pay off financially. And for the climate and the future of our children, solar energy is worth it!

Myth 13: How complicated is maintaining and monitoring a solar system?

Maintaining a solar system is important, The most common type of solar cleaning work required for your system is solar panel maintenance. Otherwise, errors and performance losses can go undetected for years without regular maintenance and monitoring of the power generation. Some damage is not readily apparent. If the solar system then delivers less electricity, this reduces the return.

Many insurance companies also require in the small print that the solar system is regularly serviced. If you don’t carry out maintenance, it can lead to a lot of trouble in the event of damage.

Maintenance of the solar system is recommended every four years. For example, it is checked whether all screws and plugs are still in place and whether some areas are overheated.