In 2017 and 2018, the cryptocurrency world was shocked when the Bitcoin community split into three factions due to scaling and protocol disputes: Bitcoin Core (BTC), Bitcoin Cash (BCH) and Bitcoin SV(BSV).

With three Bitcoin factions in the market today, it is no wonder that people are getting confused as to which one to invest in. This article will present a comparison of the three and their current status for readers to gain a clear delineation between them and help them decide which one to place their trust in.

While BTC maintains its position today as the cryptocurrency with the highest price and market cap, its block size has remained at 1MB with a maximum capacity of processing only seven transactions per second. Because of this, it has become unprofitable for everyday users to do business with BTC. It also has no utility because it is not possible for developers to build applications on the BTC blockchain. 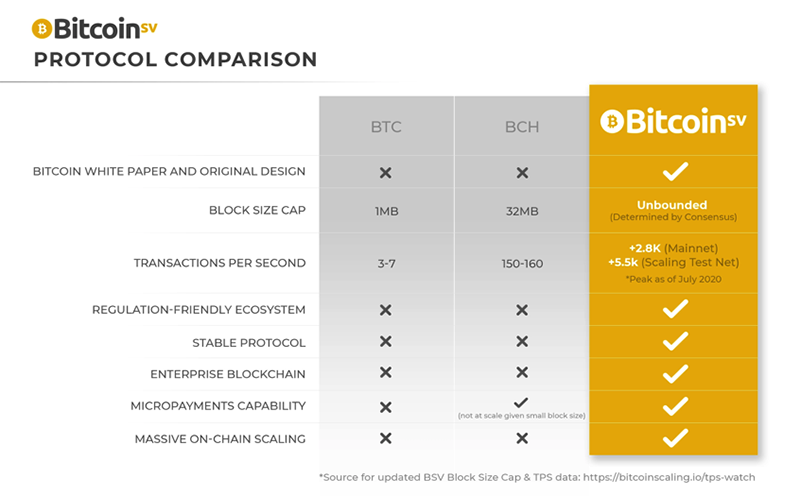 BCH, with its 32MB block size can process up to 60 transactions per second, which still does not provide enough transactions to act as a global payment system. Businesses also cannot trust the BCH protocol to develop applications on top of its blockchain due to its frequent protocol changes. Moreover, it has become known to create “darknet/terrorist offline cash.” With these controversialfeatures and frequent changes to the protocol, BCH once again forked in the latter part of 2020, which further proves its instability.

Bitcoin SV, with SV standing for the protocol developers that believe in Satoshi’s Vision, stayed true to their goal of restoring the original Bitcoin design by creator Satoshi Nakamoto, later known as nChain Chief Scientist Dr. Craig S. Wright. In February 2020, Bitcoin SV launched the Genesis Upgrade, which served to bring back the set-in-stone Bitcoin protocol as close as possible to the original. The upgrade also unlocked the Bitcoin blockchain’s potential for unbounded scalability—meaning its block size cap of 2GB will increase rapidly—and created a professional-grade security never before seen in digital currency history. Furthermore, Bitcoin SV implemented Dr. Wright’s vision of Bitcoin being “honest money,” making all transactions valid within the law.

With a stable protocol and a blockchain that has unlimited block sizes, software developers can now build various applications on top of the BSV blockchain. Real estate, healthcare, social media and online gaming are only a few of the industries who will benefit from having real-time access to global data. In the same way that the Internet has made everything online, Bitcoin SV will also make everything on-chain.